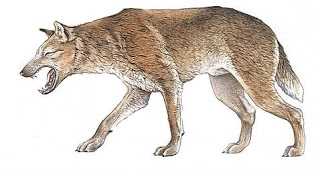 Adjules otherwise known as the Kelb-el-khela are a sub species of the african wild dog. It is said that its species inhabits Mauritania around the Sahara Desert. These creatures were first spotted by Tuaregs and is said to hunt in packs.

Adjules, according to sightings are almost over three feet tall, has webbed feet, and has crimson to dark blue fur. Local rumor also says that these creatures also posses some kind of supernatural power. Tribesmen of the Sahara say that the Adjule has the ability to secretes pheromones which causes humans to be violent and also disoriented allowing the creatures to be left undisturbed while they hunt. Despite this ability however, reports of Adjules attacking humans are yet to be heard.