Moundsville Penitentiary in West Virginia was one of America's most violent correctional facilities and the final stop for almost 1,000 criminals. A retired, gothic style prison located in Moundsville, West Virginia. It operated from 1876 to 1995. Penitentiary's design is similar to the facility at Joliet with its castellated Gothic, stone structure, complete with turrets and battlements

Northern Illinois Penitentiary at Joliet proved to be an attractive design. Its Gothic Revival architecture "exhibit[ed], as much as possible, great strength and convey[ed] to the mind a cheerless blank indicative of the misery which awaits the unhappy being who enters within its walls. The state used prison labor during the construction process, and work continued on this first phase until 1876.

The conditions at the prison worsened through the years, as the facility would be ranked on the United States Department of Justice's Top Ten Most Violent Correctional Facilities list.[4] One of the more infamous locations in the prison, with instances of gambling, fighting, and raping, was a recreation room known as "The Sugar Shack

In total, thirty-six homicides took place in the prison.[4] One of the more notable ones is the butchering of R.D. Wall, inmate number 44670. On October 8, 1929, after "snitching" on his fellow inmates, he was attacked by three prisoners with dull shivs while heading to the boiler room

From 1899 to 1959, ninety-four men were executed. Hanging was the method of execution until 1949 with eighty-five men meeting that fate. The public could attend hangings until June 19, 1931. On that date, Frank Hyer was executed for murdering his wife. However, when the trap door beneath him was opened and his full weight was put onto the noose, he was instantly decapitated. Following this event, attendance at hangings was by invitation only.[5] The last man to face execution by hanging, Bud Peterson from Logan County, lies in the prison's cemetery, as his family refused to claim his body.[4] Beginning in 1951, electrocution became the means of execution. Ironically, the electric chair, nicknamed "Old Sparky", used by the prison was originally built by an inmate there, Paul Glenn.[4] Nine men died in the chair until the state outlawed execution entirely in 1965.[4] The original chair is on display in the facility and is a part of the official tour

Paranormal groups and enthusiast travel guides consider Moundsville Prison to be one of the most haunted prisons in the United States, with ghost stories originating as early as the 1930s. Legends include the prison occupying the site of a Native American burial ground. Reports include former guards seeing phantom inmates and a "shadow man" wandering the premises, as well as unexplained noises, voices, and cold spots.[18]

Many ghost-themed or science fiction television shows have visited the prison: 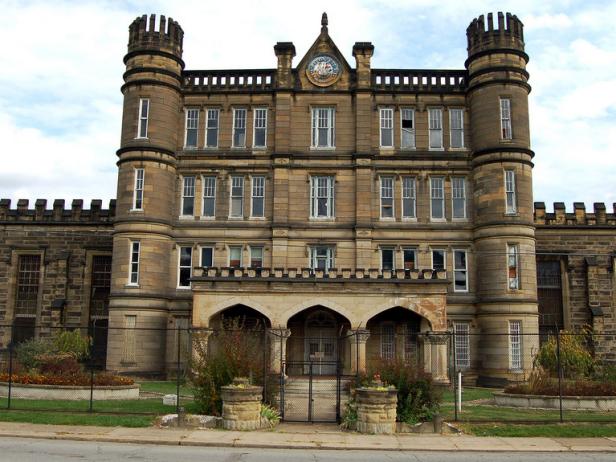