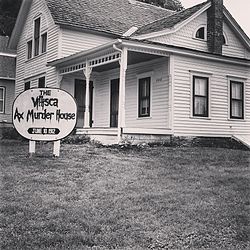 https://en.wikipedia.org/wiki/Josiah_B._and_Sara_Moore_HouseThe Josiah B. and Sara Moore House is a house in Villisca, Iowa, United States. The house was the site of the 1912 brutal murder of eight people, including six children. A documentary has been made about the murder, which remains unsolved

Prior to the renovation in 1994, at least three recorded paranormal happenings were claimed to have taken place in the house. Former tenants said that they had seen the figure of a shadowy man with an axe standing at the foot of their bed. Shoes filled with blood were found, and have since been reported to move into the middle of the room or fall over onto their side. As one report goes, a closet door opened and closed one evening, and, later that night, the tenants were seen and heard by neighbors around 3 a.m. running out of the house, screaming. In addition, there are reports that other tenants’ children woke up at night to the sound of children crying. Those tenants often returned home to find their clothing taken from their dresser and closet and strewn about the room. The father of the children was said to have been sharpening a knife in the kitchen when it suddenly turned around and forcefully stabbed him in the thumb. He later explained it felt as if someone had a grip on his wrist. The family departed the house that day and did not return.[citation needed]

The house was investigated by Ghost Adventures. During the episode, electronic voice phenomena (EVPs) were carried out. One EVP is believed to have picked up the voice of a man saying, "I killed six kids". The voice was described as if someone were swinging an axe as they said, "six kids". Another EVP revealed the names of Lena and Paul, two of the murdered kids. When asked who murdered the eight people, an EVP revealed the name, "Andy", who was one of the possible suspects. Reports show that Andy was found acting strangely, and even saying, "I'll cut their damn heads off", and making swinging motions with his arms, as if he were swinging an axe.[citation needed]

Multiple paranormal investigations were conducted at the house, resulting in many EVPs, videos, and photographs, leading the creators of Ghost Adventures to suggest that the house is haunted