We will have feature stories from a variety of sources displayed right here. Check back often as we will be updating this section frequently.

The Shanley Hotel is a gracious old-style inn nestled in the Shawangunk Mountains of Ulster County, New York.  It consists of 35 rooms, a hidden basement room, and a former bordello.

From the late 1800's to the early 1900's the Shanley Hotel was a summer vacation
destination and had been the resting stop on the railroad for many a weary traveler. It was the town’s favorite watering hole and home for the hard workers during the D&H Canal to the Industrial age. Aka....tending to the nobility ,consisting of a 'Private Gentleman's Club Quarters' doors only opened to their distinguish members and availability to the 'Ladies'

The original hotel was first built by Thomas Ritch in 1845, claiming in a local
newspaper to be, "one of the area's best with fine food and new furnishing."  In 1851
it became Hungerford's Hotel, "one of the most beautiful and commodious public
houses to be found in any section of the country."

There have been many owners since Thomas Ritch , but the one who seemed to have placed The Napanoch Hotel on the map was James Louis Shanley.  He was born in Ireland on October 31 (Halloween), 1874 and moved with his family to New
York City. James and his brothers were successful business men, opening many
elegant restaurants and  Hotels across the country. He moved upstate and
purchased the hotel on October 1, 1906.  In 1908 he added a bowling alley,
billiard room and barber shop to the building.

In 1944, Beatrice sold the hotel to Allen Hazen and moved back to NYC.
Interestingly, Al Hazen was born and had died the same days (different years) as
James Shanley. The owners of the hotel over the years were mostly family
oriented yet welcome travelers far and near.   If the hotel wasn't your home, it was
definitely your second lodging.

Ownership changed hands repeatedly soon after Mr. Hazen's death, eventually
leaving the hotel vacant and in distress. Under the current dedicated ownership of
Salvatore Nicosia the hotel is being lovingly restored to his former glory,
salvaging its memories and atoning its noble history.   After a one night stay,
visitors feel the same, it is their home too.

Paranormal activity can be experienced here at any hour of the day or night. Reputable paranormal investigators have documented activity with EVPs and photos, and countless guests have told of their experiences. Ongoing research has uncovered news articles and other documentation about past inhabitants and events at the hotel.   Rocking chairs have been seen rocking on their own, mysterious clocks chime, cold and hot spots felt, along with aromas such as Emma's (in spirit) home style cooking. Many report hearing sounds such as James Shanley's  (deceased former owner) whistling, footsteps in the halls and on the stairs, opening and closing of doors, piano music, voices, or laughter of children.   Some have seen mysterious shadows and apparitions, report feelings of being watched and followed, and objects moving or being relocated.
Upon entering the Bordello, people have reported feeling lightheaded, shortness of breath, heaviness and feelings of joy/sadness. The 'Bordello' is considered the most active place in the Hotel.   Rumors of mysterious cover-up deaths, murders and secrets are slowly revealed from the spirits whose stories want to be told - the good times and the bad.  Book your stay and see why we say,    "The Spirits Are Inn"! 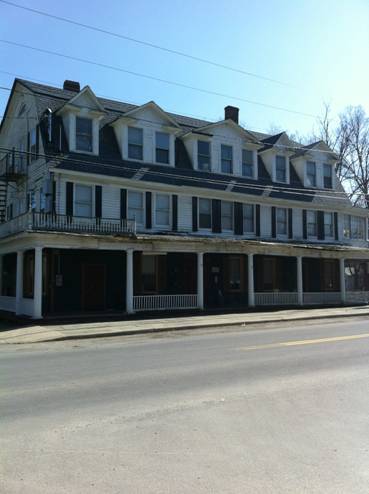