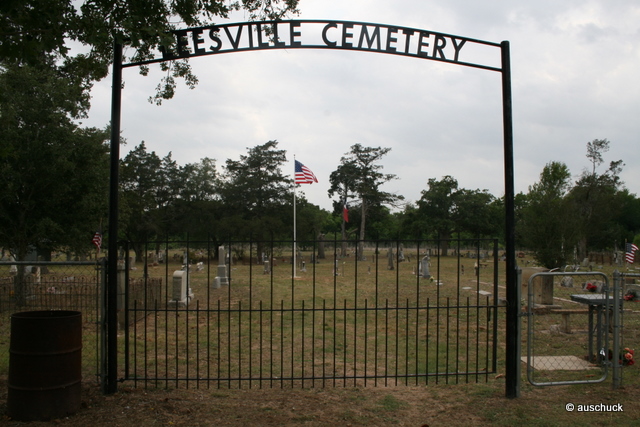 //Image provided under fair use of the copyright of Chuck Taylor

The cemetery of Leesville, Texas has always had a spooky aura. There have been various reports of the ghost of a young child walking the tombs in daylight, playing and frolicking innocently enough. But is there more in store for this burgeoning threshold and crucible of paranormal activity? Within its boundaries, there lies the victims of gunfights, brutal family disputes and other ghostly remnants of the dark-side of western and rural existence.

Walking its gates, one can smell death and old age, the smell of bedsheets of deathbeds, decaying flowers left in ones dying hours linger in your nostrils, astral sounds of mourning and grief echo across the landscape. But the locals will tell you that you're just hearing and smelling the cows next door.

The local cemetery association warns at its yearly meetings that speaking with the press of such matters is prohibited. However, word gets around.

The school house across the block has its own circuit of legend. Walking across its facades, one can often hear the sounds of chalk gradually gracing its non-existent chalkboards; sometimes one hears erasers being pounded together, chalk dust appearing in mid-air; but no erasers and no student to be found.

I will be visiting Leesville Cemetery with camera in-hand very soon. Hopefully I can catch some of this action on film.